My first book is finally a go! Woo hoo!

From February to April, I was working evenings and weekends fulfilling a dream I’ve had for many decades: writing a book about a subject I really care about: game development. On June 22 2009, Apress is publishing a book I collaborated on as lead author and tech reviewer : iPhone Games Projects. 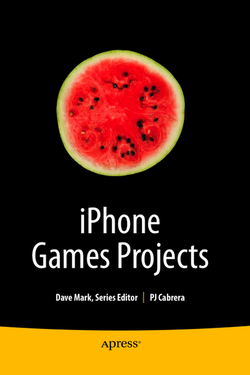 There are chapters by :

As tech reviewer for the book, I checked everyone’s writing for technical accuracy. That was really a great experience. I learned a lot and had fun running everyone’s sample code and checking their tips and tricks for myself.

I also wrote one chapter for the book, on how to implement RESTful web services for high score leaderboards and achievements on iPhone. There’s code in the chapter for a simple Rails web service, and native code for the iPhone as well. It’s a rather deep look at the subject.

I also collaborated with Jamie Gotch on a bonus free chapter. In the chapter we discussed getting started with programming for iPhone, a few tips and tricks, and the A* path finding algorithm. I also developed a Puyo clone and explained the most important parts of the code.

Full source code for the Puyo game will be provided. There is also source code for 3 other sample apps. All the sample code will be made available the same day as the book release at the book’s support page and at apress.com

This was a very neat experience for me. I’ve wanted to have my name on a computer book, and I’ve enjoyed programming games in my spare time, since before I was a teenager (more than 30 years ago, yo! Where has time gone?)

The iPhone gives me, and everyone with the interest, a chance to develop games for others, in a very cool platform with lots of traction. This book, coupled with Beginning iPhone Development, can give you the tools to reach for the stars with your own creations! Enjoy!

I have been goofing around with computers since May 1978, when I was about seven years old. For the past decade, I've even managed to have people pay me for this! Suckers! :-)
View all posts by dreadpiratepj →
This entry was posted in game.development, iphone, life, software.development, writing. Bookmark the permalink.

5 Responses to My first book is finally a go! Woo hoo!